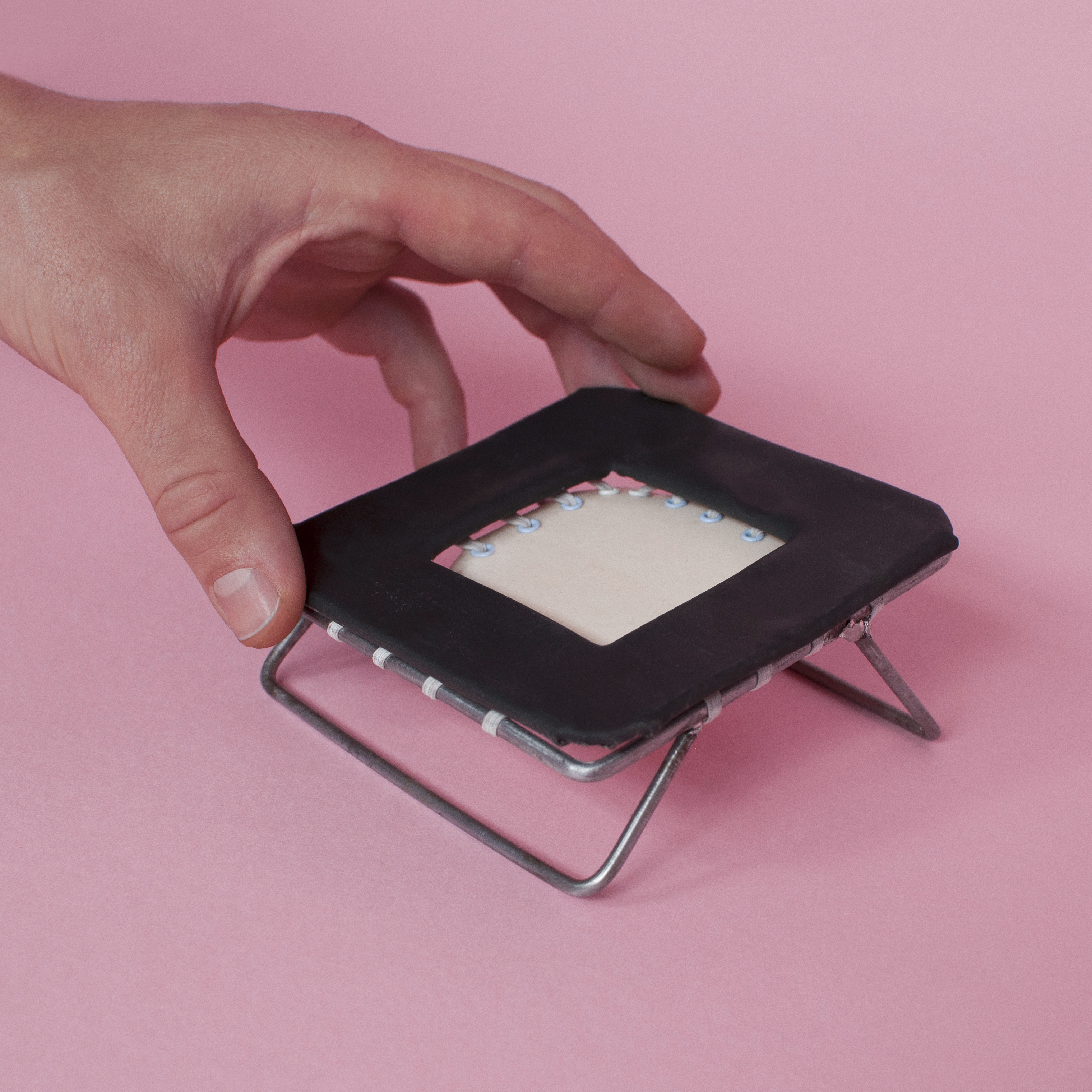 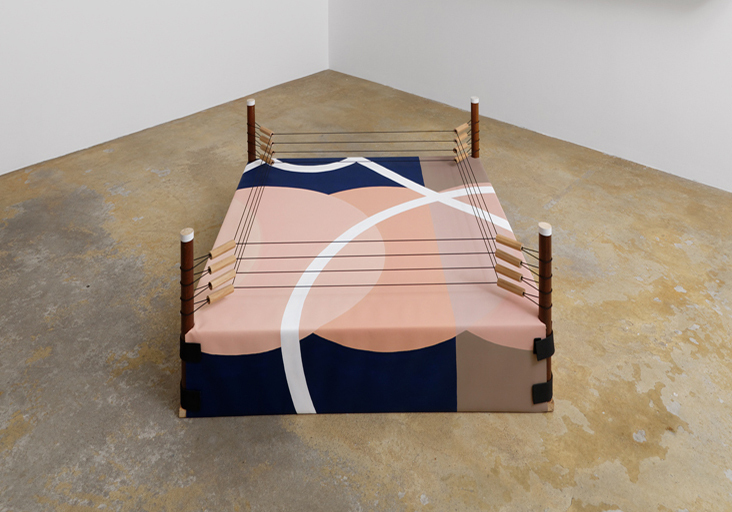 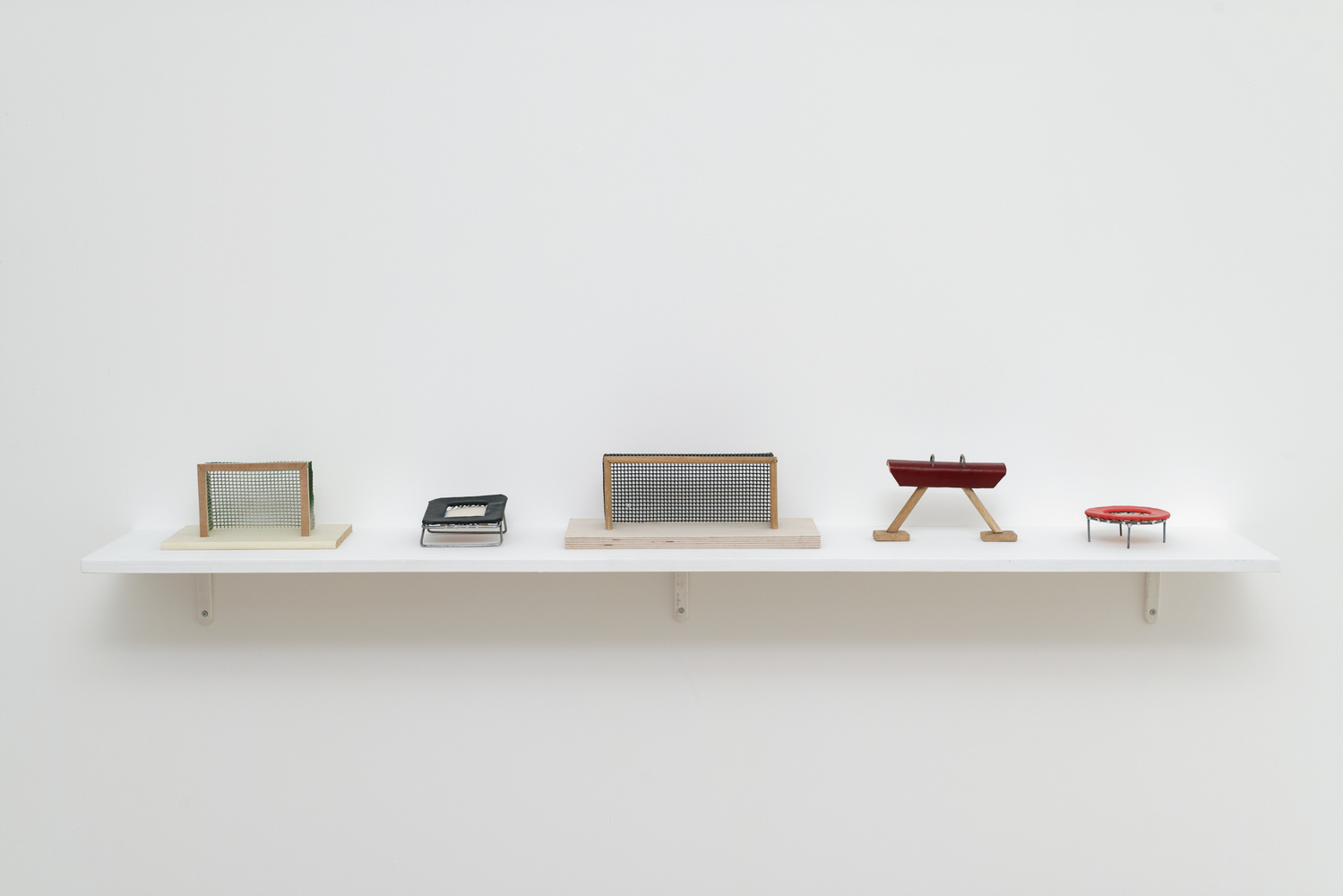 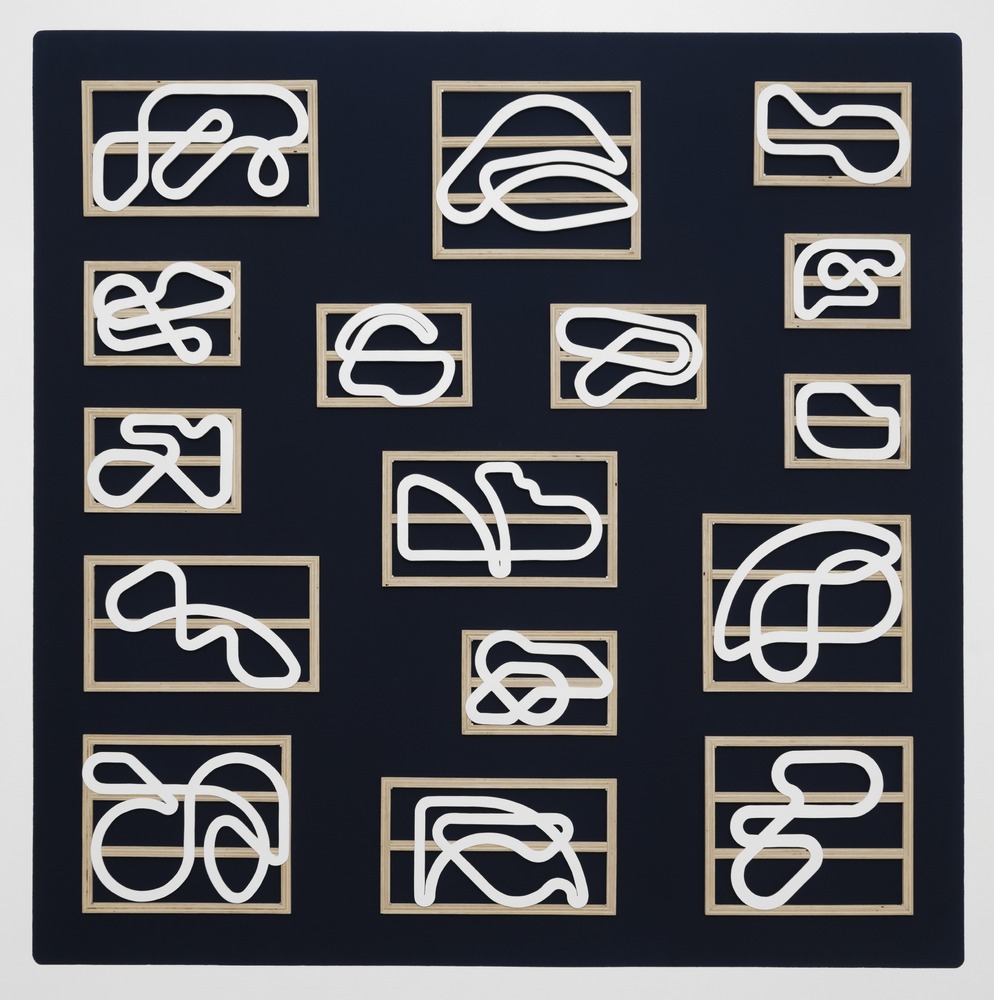 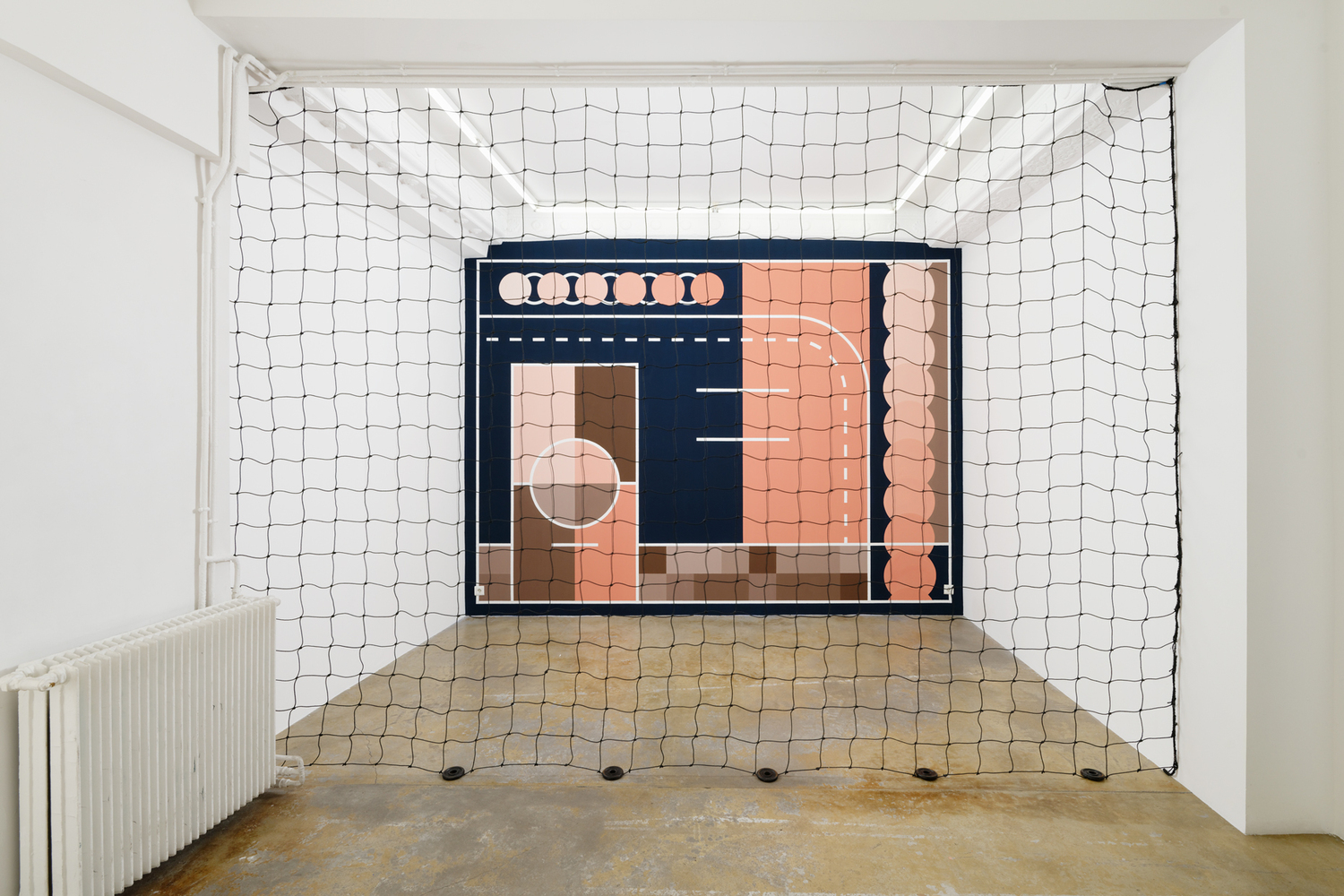 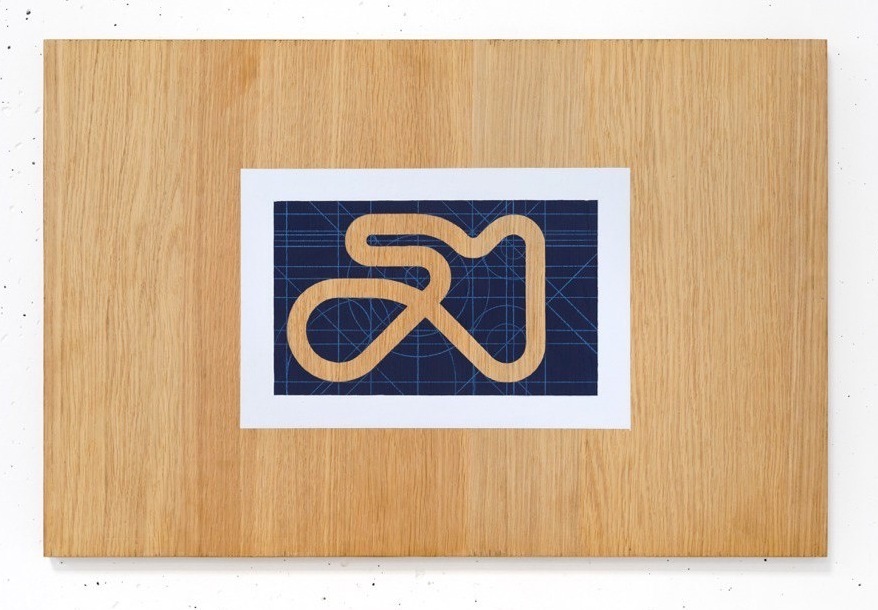 Throughout his youth, Valentin Guillon was always on the move: spinning in circles in roller skating rinks, in gymnastics, and also in spirit. Today in his artistic practice, he seeks to rediscover such hypnotic perceptual experiences in which a state of great physical concentration leads to meditative spaces. In his studio, he draws circles, geometric forms, builds models of tracks, in a serial and surely obsessive manner. He follows a quest in which the position of the viewer is central as the works are addressed to their ambulatory gaze. The format of the canvas is intrinsic to a stage like protocol that puts the body, its possible trajectories, and the way it is included and excluded into play. Valentin Guillon?s work follows the same vein as that of El Lissitzky's, who in 1927 proposed to manipulate sliding panels to vary the viewing points of artworks in his installation Cabinet des abstraits; or more recently Xavier Veilhan whose projects play with exhibition design by dynamically connecting the plinths, displays, exhibition labels, lighting, bodies and artworks, bringing invention to the exhibition space. Valentin Guillon also creates viewing devices, perceptive environments, and obstacles exploring different ways of leading the viewer to penetrate the spatial dimension of the artwork.

The painting is in situ: it designates the space and brings itself to the scale of the spaces it inhabits. The projects are formed through preliminary drawings and models which are used as steps to test, analyse and vary the proposals before entering the real space. Yet, at times the attention paid to the model portrays a sculptural or even pictorial dimension that stimulates the exhibition. Framed, hung, posed on a plinth, the model questions the necessity of the realisation by containing in itself an ensemble of possibilities open for the viewer to imagine.

Valentin Guillon has realised his second exhibition at the Galerie Florence Loewy as a reduced model of an exhibition that will take place in September 2021 at Wonder, a collective studio space in Clichy where he works. In it, we discover a fresco, a ring, tracks, and a net that crosses the room­? a structure simultaneously connecting and separating the space. The forms that he manipulates evoke not only sport equipment and architecture inscribed in our collective memory, but also the history of geometric abstraction with the pleasure of misappropriation, play, and manipulation. By realising both projects at the same time, Valentin Guillon has created a tension. As in a tennis match, the gaze moves back and forth, from the model to the in situ work, skimming the net stretched between the two, never ceasing to put the work into play. The viewer finds themself stuck in a coming and going between two possible steps, experiencing the impossibility of deciding which one is complete. Valentin Guillon makes us live the rules that are at play on the field, as with his previous exhibition in the gallery where we literally stepped onto a roller skating rink. Here, we follow him in the time of preparation, the warm up, exploring his capacity to produce an aesthetic experience. In the narrow space of the gallery, Valentin Guillon multiples perspectives, optical movements, staging the path through a dense and stratified installation that warms the spirit and blurs the reference points between what makes an artwork and what makes an experience, an invitation to multiply the possible paths.

Translated from the French by Katia Porro