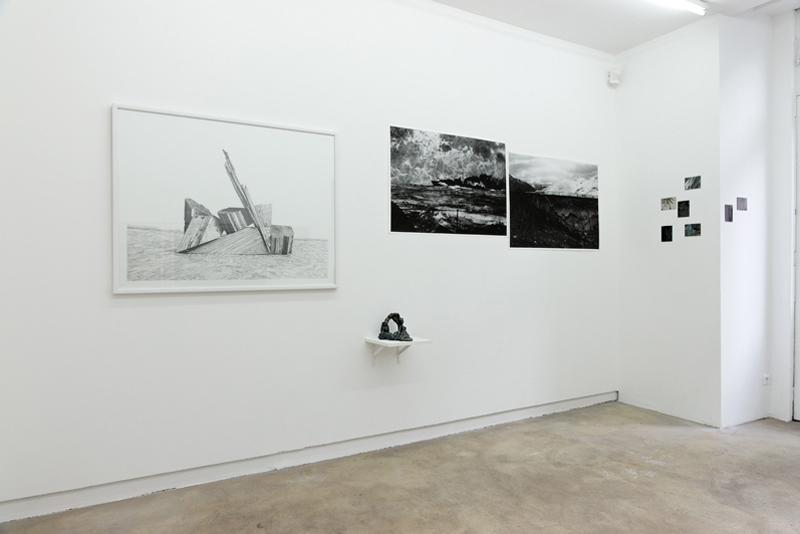 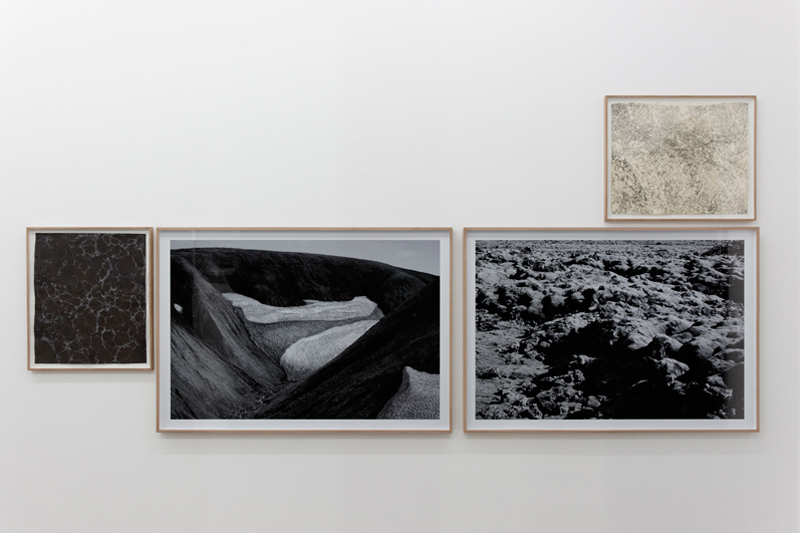 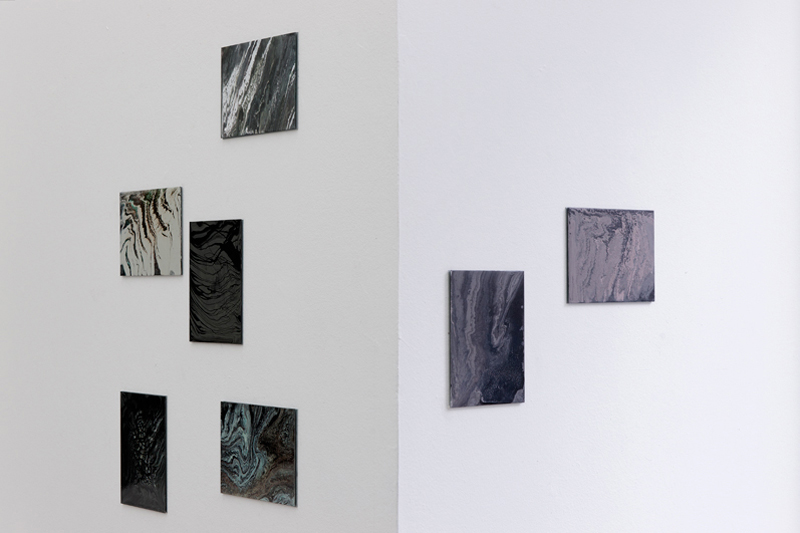 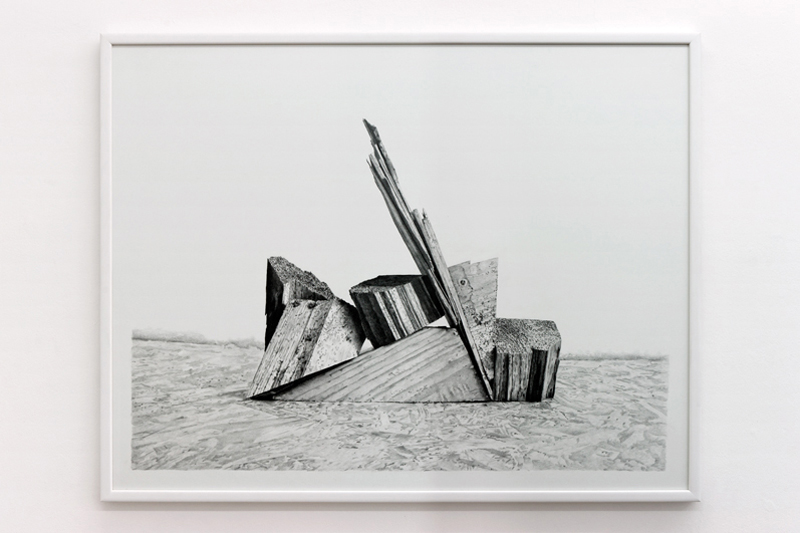 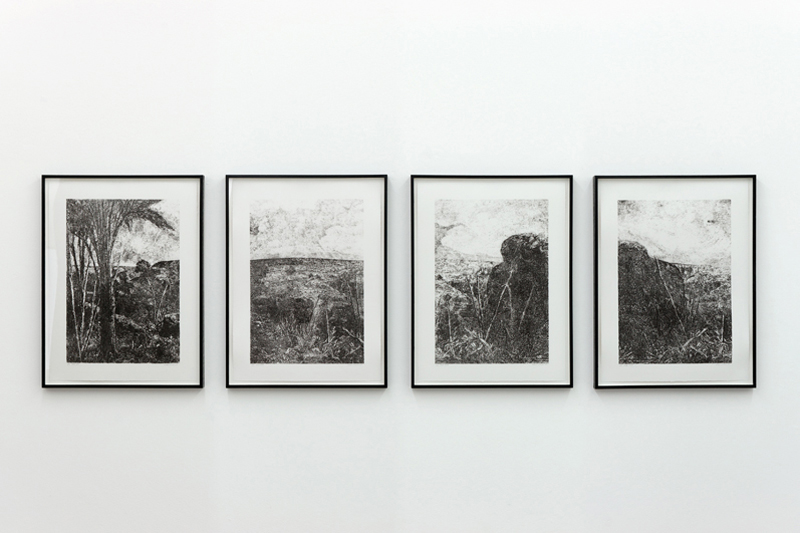 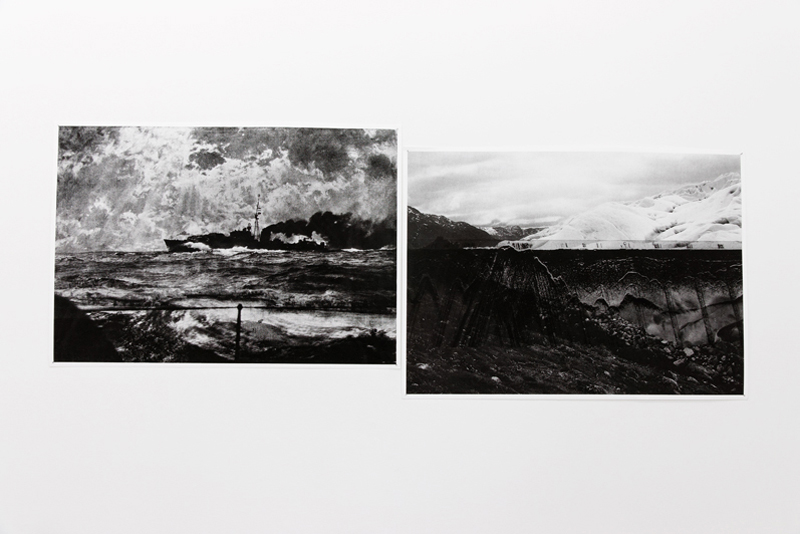 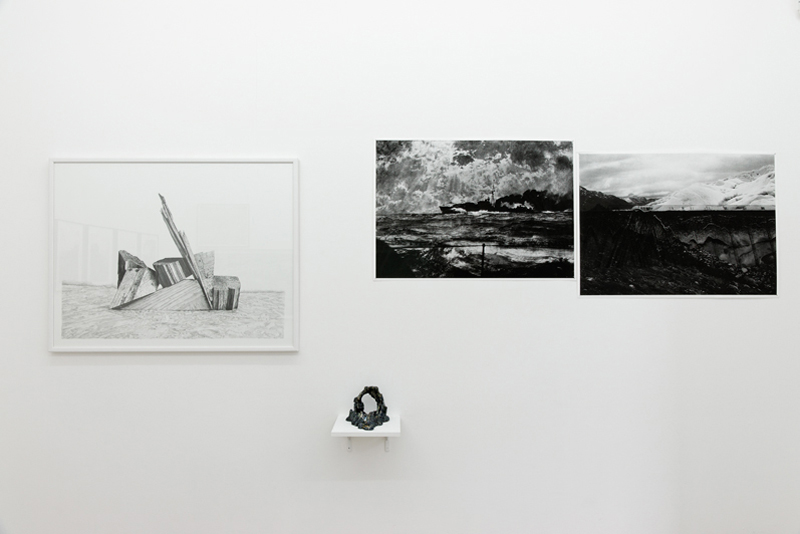 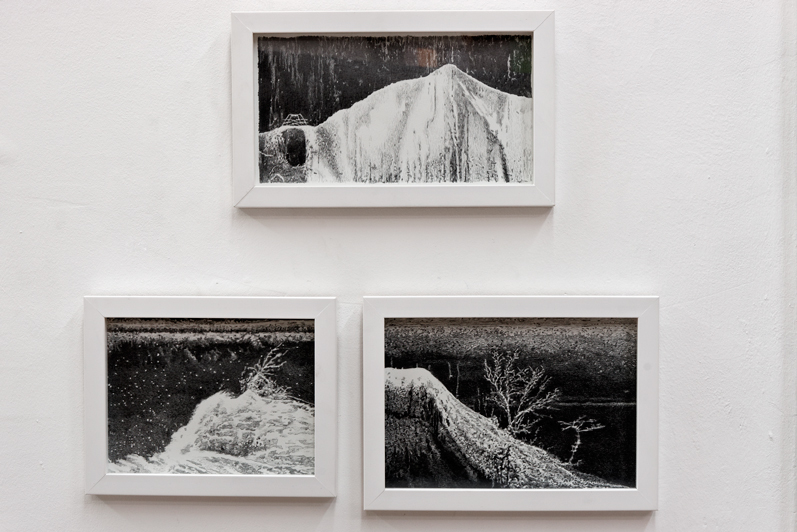 Sidelong through a sea of clouds

The character in the Redingote, seen from behind contemplating the immensity of the landscape, has disappeared, taking with him any potential narrative thread. The viewer might imagine himself in his place, confronted with the now autonomous landscape. This exhibition brings together several artists around the theme of the re-presentation of the landscape in its contemporary transcriptions. Faced with a changing and ever more disfigured world, the works presented explore the image, its manipulation and its movements. They have been exposed to risky techniques and to the vagaries of chance.

Didier Rittener works on pre-existing narratives borrowed from the history of art and representation in order to set them in a current approach : a loss of points of reference and the erasure of the individual. He applies a chemical transfer process to the images, creating a series of unique objects, each image bearing the traces of his multiple copies. The transfer, technical at first, is also mental and conceptual. Between appearance and disappearance, these depopulated worlds elicit unrest in the viewer, caused by the impression of ‘déjà vu’ in which absence, confronted to the reminiscence of forms, translates into persistent presences.

Entropy of the landscape. The artist Florian Bézu submits the landscape postcard to the torment of the chemical process, dipping the images in bleach. A multitude of microscopic crystals appear on the cardboard. From a geological point of view, the crystallisation is none other than the same natural phenomenon which transforms the landscape from liquid disorder into compact order. This collision of materials surprisingly reveals both the origin of the landscape and its disappearance. Eroded by the acidity of the industrial product, this landscape in formation will potentially disintegrate at any moment, finally crumbling into dusty residue.

Batia Suter also reflected on the usage and manipulation of images taken from our visual environment. Granting them the status of archives, she collects them, at times retouching them and reproducing them by associating them according to formal, functional and iconographic criteria, among others. By confronting two large landscapes prints in a diptych, she joins two distinct horizons on the same line, removing focus from the vanishing point, questioning the artificiality of the natural landscape and more widely the meaning of truth, fiction, and the falsehood of the image.

Lands of fire, lands of ice. Iceland offers magnificent landscapes of collision and fusion of different ecosystems. Joan Ayrton translates these dialectic contradictions by means of diptychs which unite large format black and white photographs with marbled paper. Coming from a local artisanal tradition of book binding, resulting from a long Icelandic literary culture, these ‘marbled papers’ seem to be entirely impregnated with the landscape. The iridescent effects arising from the collision of colours are punctuated with nimbus clouds: the white and scintillating cercles surrounding each drop of ink. The combination creates haphazard forms, although strangely similar to those shown to us in the artist’s photographs. This fortuitous encounter between the photographed natural landscape and the papers painted by human hand reveals formal and fine art analogies. Coming from nature, this paper material translates its palpable, ephemeral and fragile beauty. In the same way that Florentine marbles are ‘stones with images’, they reveal themselves to be ‘papers with landscapes’ - and psycho-geographical impressions. Between macro and microscopic visions, the meanderings of the paper are at the same time both a detail sliced from the rock and an expanded panoramic point of view: the space is open and has depth. With a curiosity for these analogies between landscapes and the randomness of the technique, Joan Ayrton produces unique paintings with lacquer, letting the material react on small metal plates. The narrow format does not restrict the possible range of landscapes evoked, since the colours and the changing reflections offer as many meanders as possible interpretations: folds of rock and slivers of foam.

Alexandra Pellissier works from seabed images recreated with the use of a software which emits beams of high frequency sound waves. She then transposes these immersed landscapes into genuine drawings, with Chiaroscuro nuances of graphite layers. A diffuse tranquillity emanates from the revealed silent landscapes, with a realism so precise that our vision seems blurred by the density of the water. When all traces of life have disappeared and we have lost all point of reference in the landscape, Alexandra Pellissier domesticates the void, using a collection of natural materials to create an architecture of uncertain scale and undetermined raison d’être. Yet the precision of the drawing, the rigour of the stroke, the overlapping forms and volumes reproduce the details of matter with hyper-realist mastery. Once again we lose ourselves in the very matter of the landscape: the veins, folds and cuts of the wood.

A contemporary version of landscape dramaturgy where one is surprised not to lament the absence of man.